C.J. McLaughlin will return to the NASCAR Xfinity Series on October 10th, 2020 for the “Drive for the Cure 250 presented by Blue Cross and Blue Shield” at Charlotte Motor Speedway’s “ROVAL”, piloting the No. 99 Trade Hounds / Hyundai Material Handling Chevrolet Camaro for B.J. McLeod Motorsports in the second race of the series’ playoffs. 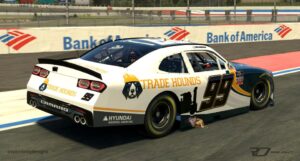 “I’m really excited to team back up with B.J. McLeod Motorsports,” said McLaughlin. “I’m also proud to be backed by Hyundai Material Handling and Trade Hounds, both companies really demonstrate my blue-collar background.”

McLaughlin was originally scheduled to run at least 20 NASCAR Xfinity Series races this season for RSS Racing this season, before the COVID-19 pandemic forced NASCAR’s National Series into a nine-week hiatus, a delay that has impacted many driver’s racing schedules for 2020, including McLaughlin’s.

While longtime sponsor Sci Aps is still a huge supporter of McLaughlin’s racing career, the company was forced to regroup following the shutdown, putting McLaughlin in a tough financial position in terms of his racing efforts for 2020.

However, the October 10th event at Charlotte Motor Speedway’s “ROVAL” won’t be the last we see of C.J. McLaughlin in the NASCAR Xfinity Series this season, as the 28-year-old has confirmed that he will be piloting the No. 93 RSS Racing Chevrolet Camaro in the series’ season finale at Phoenix Raceway, while also trying to gather the funding for additional races to close out the 2020 campaign.

Despite only having one start with B.J. McLeod Motorsports, McLaughlin earned his career-best finish with the organization last August at Bristol Motor Speedway, bringing the No. 99 SciAps Toyota Supra home in 23rd-place.

McLaughlin’s run in the No. 99 Chevrolet Camaro will be his first on a road course in the NASCAR Xfinity Series. McLaughlin will also make his debut at Phoenix Raceway when he visits the facility for Championship Weekend.

I had the pleasure of speaking to C.J. McLaughlin about the outlook for his 2020 NASCAR Xfinity Series Season in March (mere days before the cancellation of the Atlanta Motor Speedway race weekend and the subsequent shutdown). – JS

Many inside and outside the industry think disruption is coming. But construction has been...